"There's a killer on the road, His brain is squirmin' like a toad..."

Finally, the winds were blowing in our favour once again and with our new family surrounding to wave us off we cast away for a second time! 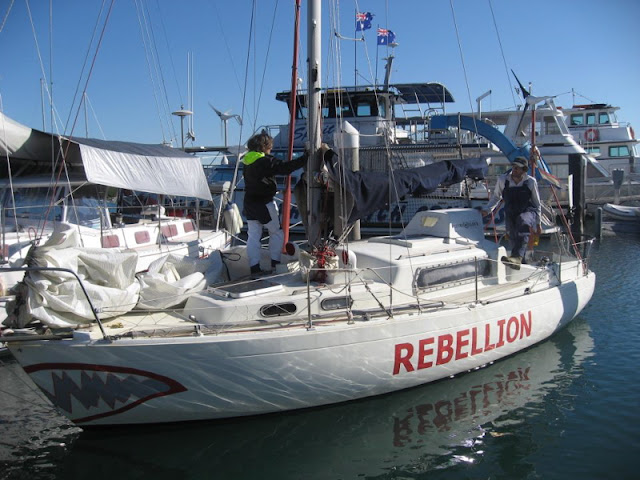 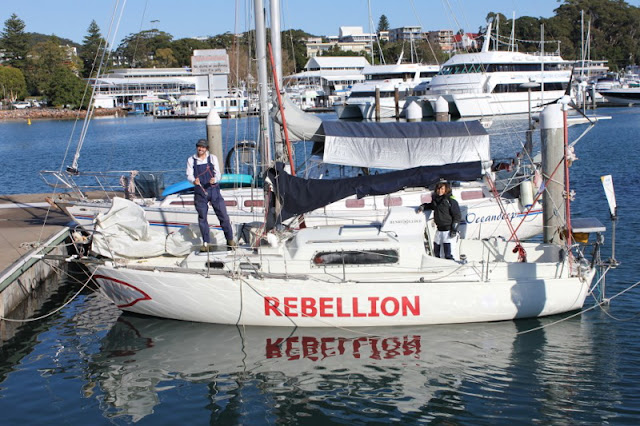 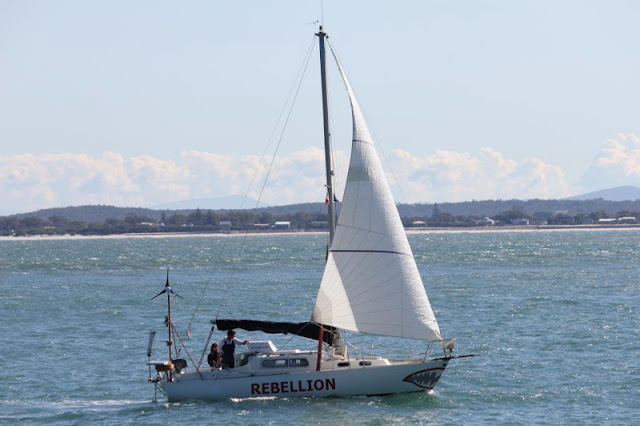 The start of what would turn out to be a week without touching land was euphoric. Perfect conditions; bright hot sunshine in a cloudless sky mixed with plenty of wind (and from the right direction… for a change). We were in a great mood, the speakers up on deck were blaring bluesy Eric Clapton as we reclined grinning with the sun and wind spurring us on.

Makes you wonder why anyone would ever want to do anything else… seriously.

Sailing to me is this wonderful concoction of exhilaration and tranquillity. Along with the thrill of racing through the water and the danger of being out on the ocean, there is a peaceful meditative quality that is hard to find on land. My soul feels satisfied, quiet (for once), at rest. It calms me, evaporating land-based worries, letting them drift away into the atmosphere like the steam from a coffee cup. Buddha must have been a sailor.

Skipping over the waves by the light of the moon, reminds me of the way the harmonica prances down the arpeggio in the opening bars of Bob Dylan’s “I want you”. Leaning back watching the mast light stagger drunkenly between the stars above. Sea shimmering under the moonshine, reminiscent of the rippling piano in “Temporary Like Achilles”, (Blonde on Blonde album now making an appearance on my overused iPod). Reflecting peacefully along to Dylan’s “Visions of Johanna”, with “ghost of electricity howling” on the horizon. Chasing waves, watched by stars, Rebellion glided with whales through black velvet. A participant in the metaphor “two ships passing in the night”, as tiredness ate away at my eye sockets.

Riders on the storm

Each day, slowly a gale crept up on us as I watched the waves grow… 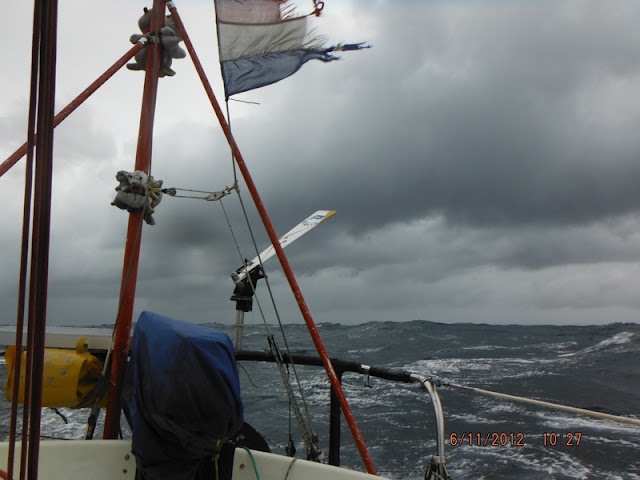 The days blurred into one; snoozing away stormy afternoons curled up like a cat on my bunk, now a nest of blankets, clothes, wet weather gear, fur coat, life jacket, harnesses, a tangle of wires, headphones, iPods, books, pens... loose shreds of tobacco :p . Occasionally thrust into the fresh air of the cockpit to stare in awe at the great grey mountains rolling after us from all sides.

Being on Rebellion is like going out to sea in a bathtub, we were rolling like crazy. Back in my nest again eyes closed, still the rugged water ogres form before them. Bully waves pummelled against the boat. The most arduous task became the toilet trips. There are reasons why rollercoasters are toilet-free. Towards the end I had pretty much given up consuming anything, in a vain hope of diminishing the frequency of these trips.

Winds grew stronger, waves grew higher, until fresh air was a thing of the past as the danger of being in the cockpit trapped us inside the cabin. Forced into an almost permanently horizontal position feeling like death impersonated.

We began to experience exceptionally malicious attacks from waves, impacting with such force as to encourage the mast to snuggle up to the water. You could hear them coming, hissing and rumbling, building up to the boat. The contents of the cabin began mambo-ing around along to David Byrne’s “Hanging upside down”, whilst we prayed for the survival of the auto helm from death by waves. This assassination would result in Paul having to steer 24/7.

This was realised during my short burst of helming in these excitingly terrifying conditions during an earlier sail change. We noticed that my arms were too short to push the tiller to the opposite side of the boat whilst holding onto the rail. Hanging on in such a fashion was a necessity at this point if I wanted to remain inside the cockpit due to the size of the waves… “Too short”; story of my life…

One particularly ferocious wave even managed to send me flying from my foetal position on my bunk, across the cabin, through the ropes holding up the lee cloth and left me whimpering in a corner on the opposite side of the boat. Now complete with headache and new bruises to accompany my seasickness Paul attempted to comfort me. He explained that a benefit of a small boat is that at least you haven’t got very far go to when that happens, thus bones are less likely to get broken… a small comfort at this point! 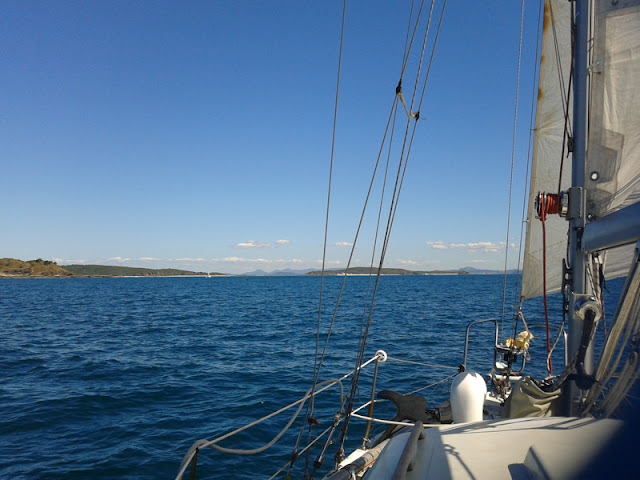 LAND!!! After six days at sea, the last four of which were spent almost incapacitated. It was so wonderful to be able to open the hatch door once again without risk of it being blown off its hinges and one’s body sucked out with it. Finally we were free to exit the cabin and be reinitiated into the outside world. A world that greeted us now with vibrant colours, smiling and twinkling under the sun, as if to say “Now that wasn’t so bad was it?” And indeed any trauma caused by the last week’s events quickly vanished. This is what sailing is all about.

It felt so refreshing to be able to gaze outwards once more after the eternity being scrunched in a ball lost in inward musings, revisiting and reminiscing over old friends, events, real and imaginary. What joy at being able to resume a vertical position once again, relieved (and vaguely surprised) to find my legs still in working condition. Finally I permitted the exit of my body from the casing (clothes) in which it had been wallowing for the last week, so that Paul could resume breathing!!!

Sat rocking GENTLY in the cockpit once more, watching the glowing ball of light rise majestically out of the sea creating an enchanting golden pathway from me to the end of the world. I reflected that sailing is a thing of extremes; sometimes you are riding the crest of the wave and sometimes you are trapped in a trough… and at that moment we were definitely on the crest.

We anchored at the first abiding island; Keppel the Great! 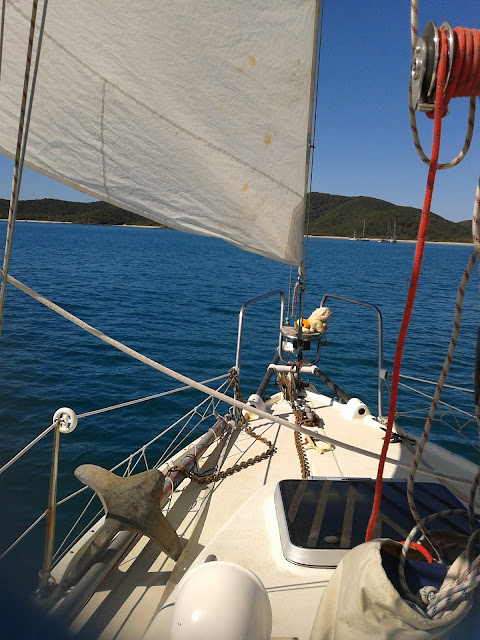 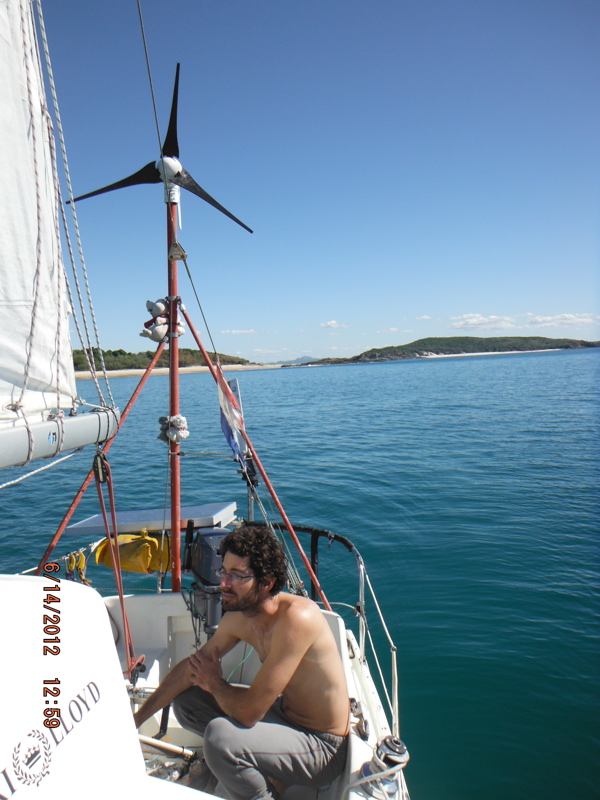 Finding myself so enamoured with my surroundings combined with my fresh experience of being cooped up on a 27 foot boat for a week without land, brought me to a cross roads. Letting my sensibilities get the better of me, I dove deep and fished out my honest feeling that I wasn’t 100% comfortable with the idea of racing to cross three oceans on Rebellion just yet. Each crossing would comprise of a month without touching land on a small craft lacking in certain safety features such as a serviced life raft. I decided that it might be wiser to slacken my pace somewhat and gain more experience aboard boats cruising these paradisiacal waters before undertaking an ocean passage. I am definitely still very keen to undertake at least one such passage by the end of the year, but perhaps on a bigger boat with more people would be a better starting point.

I was fortunate enough to meet a “local”, who having preference for Keppel over most other areas he’d had the experience of sailing around, now remained almost permanently anchored off there. He offered me the option to stay aboard his boat in return for a few hours work a day whilst I search for a new craft to continue my journey on; a seemingly perfect temporary solution.

With all this in place, I transferred Paul as much love as I could through one last bear hug to wish him a safe journey home. Watching the painted shark teeth on the front of Rebellion bite through the water as he sailed off into the distance, I wondered with a twinge of sadness if that would be a sight I’d ever get to see again... 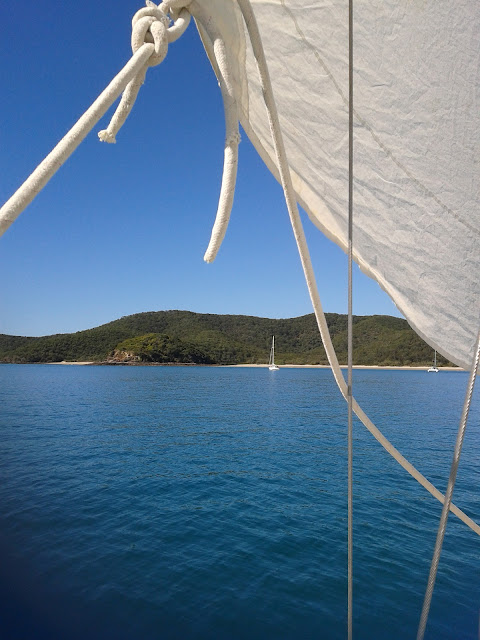 nodirectionhome
I remember whenever I got asked when I was younger what I wanted to be when I grew up, I usually joked "rock star" followed my "or free thinker and travel the world" - I guess maybe the latter of which is what I'm doing now... “It is not the strongest of the species that survives, nor the most intelligent that survives. It is the one that is the most adaptable to change.” Charles Darwin "Twenty years from now you will be more disappointed by the things you didn't do than by the ones you did do. So throw off the bowlines. Sail away from the safe harbor. Catch the trade winds in your sails. Explore. Dream. Discover." Mark Twain